At dusk, the atmosphere transitioned from the last of the bird songs to a soft munching sound overhead. Looking up, the air was filled with bats, gorging on stinkbugs, beetles, mosquitoes and flies.

Using their flexible bat wings to catapult themselves into fancy dives and other maneuvers, the aerial catches were amazing to watch. Knowing that these bats play a vital role as primary predators of night flying pests made it even more exciting to see so many of them at work against the evening sky.

Amazingly, this site may be home to a “maternity roost,” in which females rear their pups, preparing them to fly by early July.

Breeding female big brown bats will often eat their weight in insects before the sun rises. So, if each female bat weighed, on the average, 15 grams, the colony could be impacting approximately six pounds of pesky insects in an evening. That’s a lot of bugs!

Since the bat condo has the capacity to hold up to 3,000 individuals, Metroparks is hoping that the bat population at this site continues to increase. 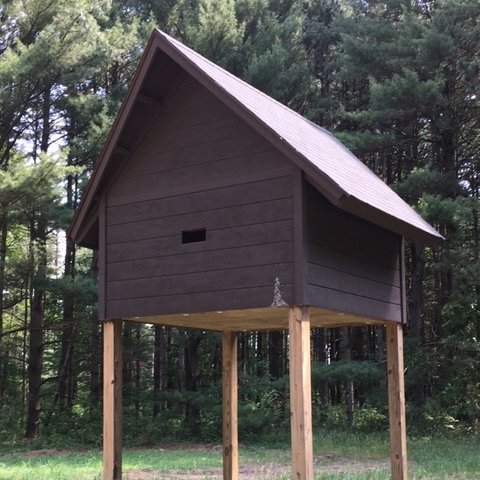 Of an estimated 1,000 bat species worldwide, 11 are found in Ohio, with eight species living in the Oak Openings Region. Because of factors such as habitat loss and white-nose syndrome, a fungal disease impacting a high percentage of our native bats, six of Ohio’s species are state-listed as species of concer. The Northern long-eared bat is listed as federally threatened.

Conserving bats and their habitats is essential to sustaining our ecosystems. That’s why Metroparks will be placing future bat condos in other areas, and continue to monitor the populations.

This summer, in conjunction with Metroparks, researchers from Bowling Green State University will be monitoring bats along the trails at Wildwood Preserve, Secor and Oak Openings Preserve using special bat call detectors. These devices record bat echolocation calls emitted for hunting and navigation.

Interested in becoming a volunteer and participating in this citizen science project? Please contact Annie Devine, volunteer coordinator, at annie.devine@metroparkstoledo.com.