Construction is underway on Phase 1 of the new Metropark on the east side of the Maumee River.

The Board of Park Commissioners in September approved a contract with the Lathrop Company to construct the 30-acre first phase of the project and provide pre-construction services for the next phase at a cost not to exceed $8 million. It is the first time Metroparks has used a Construction Manager at-Risk agreement. Under a CMAR, Lathrop will work cooperatively with the engineer and other consultants to manage the project to completion within a guaranteed maximum price.

Phase 1 is bordered by the Maumee River, Front Street, the Marina Lofts apartments currently under construction on Main Street, and E. Broadway, which will be extended across Front and become the park entrance.

“This is only a beginning,” said Scott J. Savage, president of the Board of Park Commissioners. “By this time next year, phase one will be well underway as plans are being finalized for the next phase. What we are creating is not only a beautiful Metropark, but a gateway to our community. This is an important step in the renaissance of our entire waterfront on both sides of the Maumee.”

Phase one of park development will include:

A separate contract will be awarded next year for construction of a bike and pedestrian bridge over Main Street to connect Glass City Metropark with the City of Toledo’s International Park.

Phase one and the bridge are expected to be completed by the end of 2020.

Since September 2018, Metroparks has purchased 67 acres of riverfront land from ProMedica for just under $6 million, with more than $4 million of the purchase price paid for by the Clean Ohio Fund. A federal Department of Transportation grant will pay for nearly $1 million of the $1.2 million cost of the bridge. Additional funding from the National Fish and Wildlife Foundation and U.S. Forest Service will support habitat restoration and reforestation.

“The success of Middlegrounds Metropark and the tremendous amount of support and input from the community on this project demonstrate the potential for this to be the start of a truly transformational project for our region,” said Dave Zenk, executive director of Metroparks Toledo. “Our vision is to have connected neighborhoods on both sides of the river that will enhance our quality of life and property values, and project a fresh, welcoming face of northwest Ohio.” 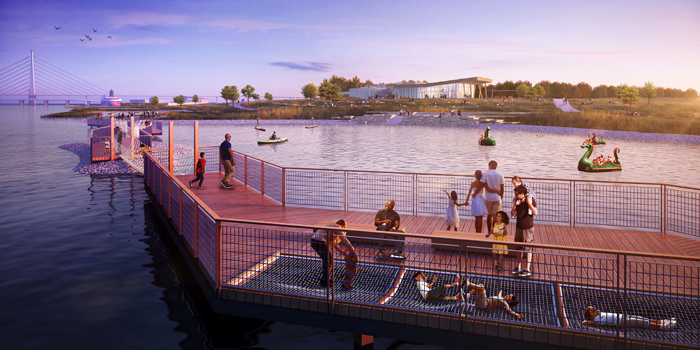 As construction is set to begin soon on phase 1 of Glass City Metropark, two grants recently awarded to Metroparks will help fund planning for phase 2, roughly between E. Broadway and the National Museum of the Great Lakes:

“The funds will enable the park system to conduct a comprehensive planning process necessary to transform the property into a world-class waterfront,” Zenk said. “Just as important, they are an early vote of confidence in the project from important community partners.”

What Others Are Saying

“Many riverfront communities have come to realize that they had turned their backs on their most important asset, a river. Although many rivers served an important industrial purpose at the beginning of the last century, today’s purpose is even more impactful. The Maumee River can serve multi-purposes: it can continue to serve commercial enterprises while also being a place to enjoy a vibrant, healthy lifestyle. By doing so, people in other communities have responded – they are moving back into a downtown setting, especially one that offers recreation on a riverfront.

“There is strong evidence that parks stimulate economic development in local communities. The work of Metroparks Toledo along the riverfront will help strengthen nearby businesses and neighborhoods, attract new investments and bring visitors to the area. As an anchor institution headquartered in downtown Toledo, we are excited to see this level of progress in our community and look forward to having a first-class, waterfront park nearby.”

Sharon Speyer
President, Huntington Bank Northwest Ohio Region, and chair of the board of ConnecToledo

"Glass City Metropark is a forward thinking project that will make Toledo an even greater place to live, work and play. The enhancements to the Maumee River will be a catalyst for redevelopment in both Downtown and East Toledo. A revitalized riverfront will provide better access to the riverfront, more space for community events and places for people to enjoy natural amenities in an urban context.  These plans are important to make our entire region more competitive. Making Toledo a great place to live is imperative to keeping local talent, and talent is essential for economic development "

"The start of the construction of Phase 1 of the  Glass City Metropark in East Toledo marks the culmination of many years of collaborative work and investment to not only further open the Maumee riverfront to the residents of East Toledo, but to also begin the development of an exciting and adventurous new park that will attract regional and national attention to Toledo's riverfront and neighborhoods. 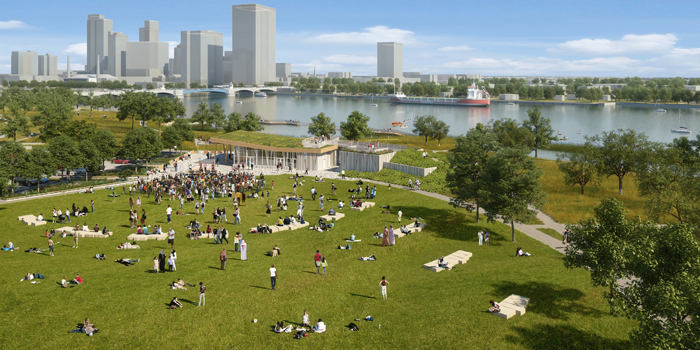