Some 30,000 trees were planted in April in the Oak Openings Corridor and at Swan Creek Preserve.

Another 12,000 trees and shrubs were planted in time for the opening of Howard Marsh.

And 5,000 more trees were planted, also in April, at the Fallen Timbers Battlefield.

The largest of the projects was completed by a contractor and funded with approximately $274,000 from The Nature Conservancy through a new sub-award of federal funds. The money was from the Pittman-Robertson Act, which collects an excise tax on hunting gear to invest in habitat restoration.

The trees were planted on about 60 acres total in the Oak Openings Corridor, including land known as Springer Farm that is being developed as the next new park, and on land at Swan Creek visible from Airport Hwy at the intersection of Angola Road.

While the trees and shrubs at Howard Marsh were planted by a subcontractor, the reforestation of the Battlefield was a project of staff and volunteers. It was the third consecutive year that 5,000 trees were planted at the site.

Why are the trees planted so close to each other? They aren’t. According to Tim Gallaher, a crew leader in the Natural Resources Dept., the trees are 10-12 feet apart, but may look closer to an observer.

Gallaher, who is a forester, said the trees were planted by hand for a more natural look; close enough that it forces them to compete, resulting in taller, straighter growth; yet far enough apart to give them the best chance at survival.

Another frequently asked question is about the protective tubes. They provide shelter from browsing animals and the elements, giving the tiny trees a fighting chance to thrive.

The trees planted at all of the locations are a variety of native hardwoods, such as oak, hickory, walnut and cherry. 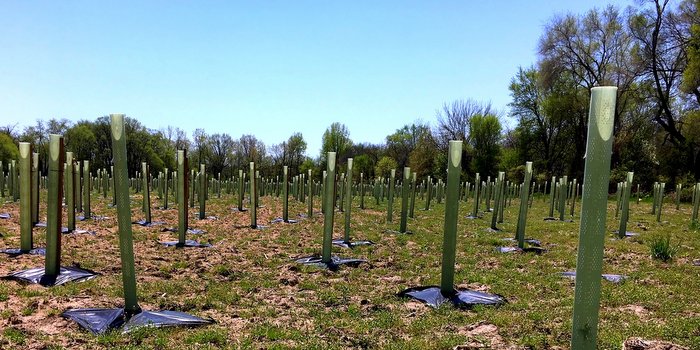