The Board of Park Commissioners has announced that construction has begun on the $1.5 million Cannaley Treehouse Village at Oak Openings Preserve, and the Metroparks Toledo Foundation announced a campaign to fund the project with private contributions.

Scott J. Savage, president of the board, announced plans to build the Treehouse Village at the new Beach Ridge Area at Oak Openings. The Village will open next year and include:

The Metroparks Construction Crew is building the treehouse village, which was designed by Nelson Treehouse and Supply, the company featured in the Animal Planet TV series “Treehouse Masters.” Nelson was also involved with the initial construction of phase 1.

“We’re thrilled to report that no other park system in the country will have a treehouse village inspired and designed by Treehouse Masters,” Mr. Savage said. “It is yet another example of the forward thinking and innovation that makes Metroparks Toledo one of the top park systems in the country. We are so grateful to the generous supporters and the Foundation, who are making this project happen in our community.” 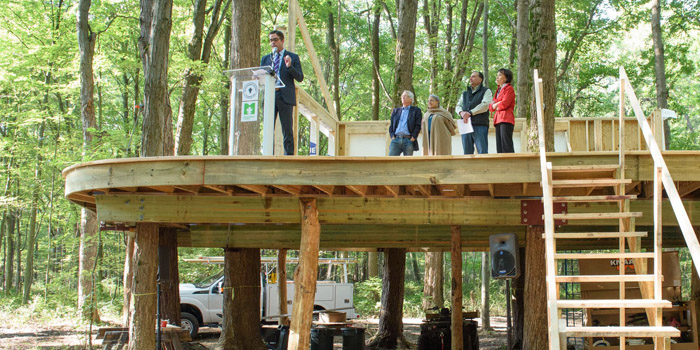 Joe Napoli, president of the Metroparks Toledo Foundation, announced that numerous donors who have already made substantial financial contributions. Because of the support from the foundation and lead donors, Metroparks has begun constructing phase 1, which includes the common treehouse, crow's nest and a tower that will support a cable suspension bridge. The campaign will raise additional funds for phase 2, which includes the overnight treehouses.

“The purpose of the Foundation is to raise resources and awareness to support the many great things Metroparks brings to our community,” Mr. Napoli said. “The Treehouse Village is our first major project, and I’m pleased to announce that we are well on our way to making this unique new experience a reality."

The Treehouse Village will be part of the 420-acre Beach Ridge Area, which Metroparks acquired between 2013 and 2015. The area also includes a just-completed, 12-mile mountain bike trail built largely by volunteers; Metroparks second FitPark, an outdoor fitness area sponsored by Mercy Health; and a new multi-use facility with a bicycle theme that also houses restrooms and showers to service treehouse guests.

“In recent years, we have added many compelling new ways for people to connect with the out-of-doors, from new parks and trails to a 3D archery course and camping on a Maumee River island,” said Dave Zenk, Metroparks Toledo executive director. “These experiences, along with the Treehouse Village, add to our region’s growing reputation as a great place to live, work and play.”

Mr. Zenk added that revenue from rentals will pay for the operational costs of the Treehouses, as well as outreach efforts to engage the community. For example, 20 percent of the time, the common treehouse will be used for public programs, giving everyone the opportunity to experience the unique facility.

Learn more and make a contribution at: metroparkstoledofoundation.org

More than $1 Million Donated so Far

Joe Napoli, president of the new Metroparks Toledo Foundation, today announced a campaign to raise $1.5 million to pay for the full amount of developing the treehouse village, with Linda Cannaley making a leadership gift of $750,000.

In addition, two Toledo-based companies were announced as project partners and donors.

Thanks to the generosity of the community, the Metroparks Toledo foundation has surpassed its goal to raise $1.5 million to build the country's largest public treehouse village at Oak Openings.

Gift will help complete the Treehouse Village, send kids to camp and involve more of the community in the outdoors.

Treehouse Model on Display this Year at Libraries

A model of one of the treehouses form the Cannaley Treehouse Village will be making the rounds this year to area Library branches.